NSU Quick, the first motorcycle which came off the restoration belt.  A German Motorcycle from 1936 which was taken apart with much love and patience and then, after restoration and an inspection by the DVSA,  as a genuine motorcycle riding on the roads. A little bit of history

The brand NSU has a long history, which dates back to 1873. In that year two German entrepreneurs founded a factory producing knitting machines in Riedlingen on the Donau. In 1880 one of them, Christian Schmidt, goes to  Neckarsulm, to start his own factory. Some years later he starts with the production of bicycles which flourishes very quickly in Neckarsulm. The brand NSU is formed by three letters from the name of the town. Activities are soon to be expanded with the production of motorcycles. already in 1903 motorcycles are produced in series, thereby making the first motorcycle factory a fact.

From 1903 the motorcycles were equipped with genuine NSU engines. In 1904 even 6 different types were produced. The moderate cooling ribs were sufficient to get rid of the heat of the slowly turning powerless engines. From 1906 on NSU cars were built. 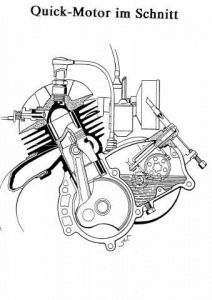 Early 30s NSU was reorganizing. The car factory was taken over by FIAT while NSU was taken over the “Deutschen Industrie-Werke” from Berlin-Spandau. And thereby the name changed (temporarily) in „NSU-D-Rad Vereinigte Fahrzeugwerke AG”. For NSU mainly the name and extensive sales network were of interest. The technology and the expertise were little of no concern to NSU.

After the economic crises they focused on the production and sale of motorcycles and regular bicycles. From 1936 to 1942 models like NSU-Quick, NSU-Pony and the OSL followed. World War II isn’t passing by unnoticed to the gates of the Neckarsulmer factory: in 1942 an all-terrain chain driven vehicle was developed.

At the same time a new chief constructor was employed. He came from England and therefor, it wasn’t a surprise that the new factory racers were equipped with front suspension, Sturmey-Archer-gears, Royal-Enfield-wheelhubs and Amal-TT-carburettor.

In May 1938 “NSU-D-Rad Vereinigte Fahrzeugwerke AG” was renamed in “NSU Werke Aktiengeschelflschaft Neckarsulm”. The name NSU was written once again without the “D” on the fuel tanks.

The production of motorcycles lasted till 1965 with well-known types as Fox, Quick, Max and Lux. Successes in the motorsport, including the world title for H.P. Müllerwith a NSU Sportmax in 1955, contributed to the popularity of the brand. Successful NSU cars in the sixties are the Prinz and the TT. The futuristic NSU Ro 80 with Wankel-engine would be the last car carrying the brand name NSU. In 1969 NSU merges with Audi. The concern name Audi NSU Auto Union AG was shortened to Audi AG in 1985.